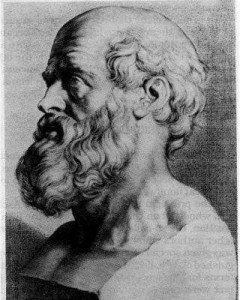 One of the most sacred pledges a health professional makes is that of The Hippocratic Oath. It is typically done in unison by a graduating class that has studied medicine, osteopathy, nursing, physical therapy and of course, chiropractic.

When most people hear about the Hippocratic Oath the immediately think of the Latin phrase attributed to Hippocrates, Primum non nocere, which translates to: first, do no harm. While this is an easy turn of phrase, these words are not spoken in the classic or modern versions of the oath. In fact, I believe many rely on the simplicity of the phrase to make a point, but it truly does not reflect the serious intent and guidelines of the oath.

Now I have to admit, graduation was such a whirlwind I barely remember reciting the oath, but over a decade later as a Seattle chiropractor, I decided to review the classic and modern versions, and have decided to post the classic version which I believe resonates extremely well with the chiropractic profession.

Apollo Physician and Asclepius and Hygieia and Panaceia and all the gods and goddesses, making them my witnesses, that I will fulfill according to my ability and judgment this oath and this covenant:

To hold him who has taught me this art as equal to my parents and to live my life in partnership with him, and if he is in need of money to give him a share of mine, and to regard his offspring as equal to my brothers in male lineage and to teach them this art – if they desire to learn it – without fee and covenant; to give a share of precepts and oral instruction and all the other learning to my sons and to the sons of him who has instructed me and to pupils who have signed the covenant and have taken an oath according to the medical law, but to no one else.

I will apply dietetic measures for the benefit of the sick according to my ability and judgment; I will keep them from harm and injustice.

I will neither give a deadly drug to anybody if asked for it, nor will I make a suggestion to this effect. Similarly I will not give to a woman an abortive remedy. In purity and holiness I will guard my life and my art.

I will not use the knife, not even on sufferers from stone, but will withdraw in favor of such men as are engaged in this work.

Whatever houses I may visit, I will come for the benefit of the sick, remaining free of all intentional injustice, of all mischief and in particular of sexual relations with both female and male persons, be they free or slaves.

What I may see or hear in the course of the treatment or even outside of the treatment in regard to the life of men, which on no account one must spread abroad, I will keep to myself holding such things shameful to be spoken about.

If I fulfill this path and do not violate it, may it be granted to me to enjoy life and art, being honored with fame among all men for all time to come; if I transgress it and swear falsely. may the opposite of all this be my lot.

While many may not appreciate taking an oath to Greek Gods, one has to appreciate the message. Unfortunately, much of modern medicine nowhere near reflects this message, and it seems to be simply disregarded as an outdated piece of history.