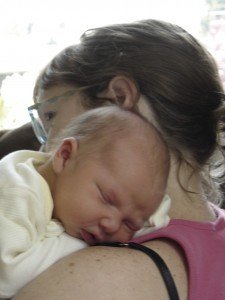 I have to admit I am getting a little nervous about the new baby coming. I play it cool most of the time, and I don’t have any bad experiences from the birth of Gordon. However, I do remember a couple of weeks prior to Gordie’s arrival, my nervous system went into hyper-drive. Difficulty sleeping. Eating poorly. Watching too much television. Gaining 30lbs over 9 months.

This time I was determined to make different choices along the way. However, I still gained weight, but started exercising earlier, before the baby has arrived.

My body has actually only been surviving on 4-5 hours of sleep since August. A combination of mono, and I believe my body preparing for late night feedings. It just knows whats coming. The best part is, I am actually not very tired, and I refuse to believe this is just a getting older thing.

I think the stress really kicked into high gear a week ago when Kate and I visited our midwife, specially so she could explain the procedure of delivering a baby by myself, just in case someone couldn’t make it to our home in time. I wanted to mention something about just being able to Google it, but I was too busy trying to look cool, while my body was shuddering inside. I don’t think it is a limitation as a chiropractor. I can do it. I could do. I’d prefer not to. It’s just how I am.

Four years ago was a whirlwind, and I believe I am better able to cope and accept the responsibilities of another child, but I wish I had written a few things down like this fellow’s home birth for dad’s blog. Another great find from Jeanne Ohm, and something I wish I knew about looking for prior to our first home birth.

Kate and I had not truly discussed much about the birth, as we were just expecting it to happen, which it did splendidly and very few complications. The advice given from that blog would have been useful though, in my opinion:

Adopt the mindset that your midwife, doula and guest support will be the million dollar team that will deliver your child into the world. You’re all responsible, and you must be on your A-Game. Assert a leadership that is nurturing. Be genuine in your gentlemanliness, and read all the cues to communicate effectively.

This advice could not be more true. Fortunately, our Seattle midwife, Charlotte Geddis, comes with a great team, and we were well taken care of.

Unlike the first time, Kate has not arranged for our doula, Diane Hamilton, who was just amazing. My guess is that Kate has no idea exactly how much time Diane spent next to her side, since I think I was out of the room taking a shower most of the time. I know I am up for the challenge, and hope to document it a little better just as the other blogger has for us. I am also hoping to talk Kate into arranging Diane to come give us a visit if it isn’t too late.

Prior to the home birth, Kate and I attended a birthing from within class, where we met with other couples who had made similar home birth choices. We were able to connect on a level with that in common, and also were able to hear the expectations of each spouse of their role in the birth. We did not get to hear how it actually went for the actual birth process which is a real bummer. It would be great to hear from other home birth dads and their experience.

The one thing the class did teach me was to lower my expectations, as many of the other men expected to take much larger roles in the process than me. Maybe I will expound on this at a later date.

It could be any day/week now, so wish us luck.