Home » Time to throw in the towel: My Sports Injury Saga

My father and I still have a laugh about the description someone once used about famously tough hockey player, Wendel Clark, to describe his overall condition.

An eggshell of a man.

This seemed extremely funny a few years ago, but after many acute and chronic injuries I seem to have become a that very same eggshell, but without the NHL fame, stardom, money, or accolades.

Sports have continued to be a major part of my life. I continue to play hockey occasionally, lacrosse, and I routinely recommend various sports and exercises to patients in our office.

However, is there a point where sporting exercise is no longer an intelligent decision?

I recognize the various proverbs of mind over matter, no pain no gain, and only the strong survive…etc..etc…, but with my history I am unsure how much more my body can take.

Looking back it seems obvious. I received my first broken collar bone at age 9, followed by another shortly after it healed.

Here is a chronological list of injuries that I have dealt with or recovered from with time out in parenthesis:

When I look at all of the injuries the only thing I see is that the time I felt the BEST in my life involved me not playing hockey. There are also other factors not taken into consideration, such as style of play, games being played, and the cascading effect of past injuries into the others, but it is quite a list.

I left out the non-diagnosed traumas, as anyone who plays sports gets hurt once in a while.

After writing the previous blog post about squatting, it made me think of all the injury free people who receive chiropractic adjustments as well as the ones I help put back together. 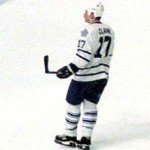 After this last trauma(which was minor in comparison to many) I will have to go back to the drawing board and attempt to find the proper combination of sport and exercise that will allow for less trauma in the future.

I certainly know my personal injury experience is effecting what sports my wife and I make available to our children. Hopefully I’ll finally take my own advice a little bit more seriously.